Sin is so terribly destructive, so utterly diabolical! Sin is so horrific that it’s true power and perversity are arguably unfathomable by the human mind. How much more so for the father of lies, the father of sin!?

We dip and dabble at it as if certain sins are permissible. We tolerate sin in our lives and sometimes even encourage it as if it’s as harmless as a squeaky screen door. Perhaps our reluctance to resist the devil (in the Lord’s strength of course) has something to do with our own perspective of sin and the father of it.

What if you discovered you were born into a family that had been hunted and killed for years? What if you also discovered that there was one person behind it all, a person only known as the prowler? You are forced to grow up on the run and after a decade of fear, the unthinkable happens. Your parents, your brothers, and sisters are all trapped and killed. Some how you are able to get away, only to go on the run again.

Another decade goes by, and you finally think you’re safe so you decide to settle down. Not too long after you move into your first place, a package arrives in the mail. Wrapped in beautiful, shiny paper, this intriguing gift causes you to let down your guard. There’s a small card attached. Your curiosity gets the best of you. You open the card. The message reads, “Dear Boy, I hope you accept my gift. Trust me, you will not be disappointed. Your Friend, The Prowler.”

Would you open the gift? If not, then why? Why not open a present offered by the one responsible for hunting and destroying so many?

Of course, it’s not always so black and white with Satan, the enemy of our souls. Or is it? Perhaps it is that clear, but because of our deep personal devotion to the flesh, we often allow the issues to become muddied so we really don’t have to think too much about them.

Maybe if we’d ask the Lord to seriously pull back the curtain on sin, Satan, and our own selfish hearts, we’d begin understanding the deep destructiveness of the worldly nets we’ve wrapped ourselves in.Perhaps if we’d sincerely ask the Lord to give us eyes to see the sinfulness of sin and the beauty of Himself, we’d choose to leave this world’s temporary temptations alone, instead clinging wholeheartedly to the only gift that truly and eternally matters, Jesus Christ! 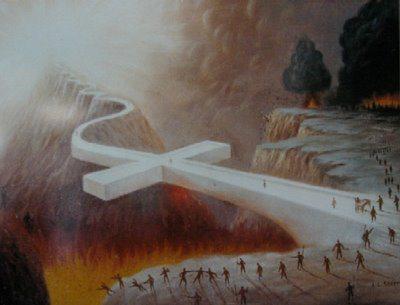 “But not as the offence, so also is the free gift. For if through the offence of one many be dead, much more the grace of God, and the gift by grace, which is by one man, Jesus Christ, has abounded unto many. And not as it was by one that sinned, so is the gift: for the judgment was by one to condemnation, but the free gift is of many offences unto justification. For if by one man’s offence death reigned by one; much more they which receive abundance of grace and of the gift of righteousness shall reign in life by one, Jesus Christ.) Therefore as by the offence of one judgment came upon all men to condemnation; even so by the righteousness of one the free gift came upon all men unto justification of life. That as sin has reigned unto death, even so might grace reign through righteousness unto eternal life by Jesus Christ our Lord.” Romans 5:15-18, 21

Posted in Uncategorized and tagged Emergent, Sin, Truth
← The Truth Will Set You FreeGod’s Love: The Radical Cross ~A.W. Tozer →