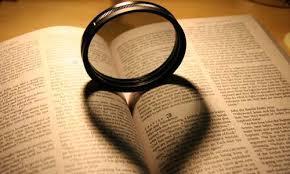 Whether in a novel, a crime show, or while at work, we have all heard this phrase borrowed by the world time and time again. However, as they understandably do so often, those who  use it strip the phrase from of its actual and powerful meaning. Sadly, many in the church have heard it said so often, they too have perhaps forgotten what Jesus is really teaching His disciples.

Early on in my Christian walk, John 8:31-32 were two verses that had a tremendous and even life changing impact on me. “Then said Jesus to those Jews which believed on Him, If you continue in My Word, then are you My disciples indeed; and you shall know the truth, and the truth shall make you free.” John 8:31-32. It occurred to me that Christianity, although filled with an amazing testimony regarding the birth, life, death, and resurrection of Jesus Christ wasn’t simply a story that changed my life. It wasn’t one religion among many which just happened to be the one that worked for me. No, Christianity was and is and always will be built upon the bedrock of the truth.

So often people get saved and are then brought into a local church body. They are quickly put to work, staying busy with activity after activity. Soon Christianity is solely defined by the activities and friendships and the Word is marginalized in place of the work. Although there is an important place for the work, unless the Word of God is put first, the work we are doing might very well end up being the work of men, not the Lord.

Once a born again believer realizes, truly realizes that Christianity isn’t merely about a changed life or the work one does; once the Christian really begins to see that Jesus is the one and only way to the Father of Life because He is the truth, then that believer has finally begun standing upon the solid ground.

Undeniably, our firm foundation is Jesus, yet as He reveals in John 8:31-32, our faith becomes solid when it is exercised with the understanding that God’s Word is uniquely and unequivocally true. We need not run to the popular preacher nor to the pop-psychologist, but to the Word of God to know the truth. There is no college, no institution, no religion on the planet that can offer what the Bible can.

Jesus didn’t say that facts will set men free. He said the truth found in God’s Word alone would bring real and eternal freedom to the souls of men. Christianity is one hundred percent based on the truth and nothing but the truth, period.

Unfortunately we tend to wander from the Word, leaning instead upon the words of men. The natural man loves the “all natural” flavors produced and peddled by other men. Yet, there are those who long for something more, something better. There are those who, perhaps for years, have done the “church” thing, yet now realize men and their activities can never truly satisfy. Only the truth will do!

In these two amazing verses, Jesus tells us many things. First, He declares that He is God. He does not say, “If you remain in God’s Word.” He says, “If you remain in My Word.” He is saying the Word spoken to the faithful followers of the LORD from the beginning of time has always been His Word. Jesus truly is God.

He also teaches us that His Word is not simply true, but that it is sufficiently so. Jesus does not say, “If you stay in My Word, you will know part of the truth.” We are promised to know ALL of the truth pertaining to everlasting freedom. God’s Word is truly sufficient. One of Satan’s greatest strategies among believers is not to deny the truth of God’s Word, but instead to deny its sole sufficiency.Once people buy into this horrific lie, they will then be willing to drink from all sorts of muddied streams, all in hopes of discovering some drop of pure water.

As strange as this sounds, this one strategy has literally and repeatedly crippled the body of Christ from walking in the true power and victory God has intended for her. May we not be ensnared any longer!

True freedom comes exclusively from God’s Word. Despite their many claims, absolutely nothing this world offers can produce eternal freedom, nothing. Neither psychology nor religion, neither education nor entertainment will do. The ways of man will always fall short of eternity and often lead to temporal destruction as well.

Those reading these two verses should also inquire about the freedom offered by Jesus. Freedom yes, but freedom from what? Jesus is not providing freedom to go live our own lives independent of divine authority. In fact, it’s just the opposite. Simply put, God’s Word promises to sufficiently bring freedom from sin, from self, and from the power of our first father, Satan.

God’s promise also ensures freedom to finally love and serve the One we were made to worship; the Living and True God, the Creator and Savior of the world. This is the freedom found exclusively in the Word of God, the Word not based on the sinking sands of man’s opinions or Satan’s devices, but rather the Word which is the truth and nothing but the truth.

On this Lord’s day, may we praise and thank Him for His wonderful reminder to stop feeding the flesh. May we cease from fearing and following the words and ways of men. Instead let us wholeheartedly love the truth of God revealed to us by His Holy Spirit as we remain in the glorious, eternal, and sufficient Word of Truth!

“And we know that the Son of God is come, and has given us an understanding, that we may know Him that is true, and we are in Him that is true, even in His Son Jesus Christ. This is the true God, and eternal life.” 1 John 5:20

Posted in Uncategorized and tagged Emergent, Psychology, Truth
← Ministry or minister?Pulling Back the Curtain →