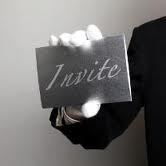 Interestingly, men are able to respond to a variety of invitations: birthday parties, weddings, funerals, and even Facebook. So why is it that so many believe that men are completely incapable of at least responding to God’s invitation of full and free forgiveness through Jesus Christ’s death and resurrection?

Too often people have believed that men are so dead in their sins that they are literally unable to even receive the Gospel. They will say that the Bible teaches that men cannot submit to God’s law. Yet submitting to God’s law is not the same as accepting the Gospel/good news that Jesus died for their sins.

An Excuse: To say that mankind is unable to do anything but sin sounds a bit like an excuse for sinning. Yes we are bound in our sins and trespasses, and it is true that some sins have such a hold over us that we, at times, are owned by our sinful lusts and passions, but to

simply say we are unable to choose anything else takes our own decisions and accountability out of the picture.

To say men are unable to receive the Gospel is simply and biblically unfounded, but to say we are unwilling to hear and follow the Lord God is a another story altogether. Many who believe in the “deadness” of man, equating it to “inability”, attempt to use Romans 8 as a chapter to validate their doctrine.

Romans 8:7, “Because the carnal mind is enmity against God: for it is not subject to the law of God, neither indeed can be” isn’t dealing with salvation, rather it’s laying the foundation for the spiritual reality of the old, carnal man which then sets a precedent for the necessity of the new birth in Christ Jesus.”

Interestingly, one of the only insights in Romans 8 as to “how” a man is born again is found in verse 15, “For ye have not received the spirit of bondage again to fear; but ye have received the Spirit of adoption, whereby we cry, Abba, Father.” (Emphasis mine)

Just because the carnal mind is at enmity with God doesn’t mean he is incapable of at least receiving the Gospel of God. If we are capable of rebelling, we are also capable of asking God for forgiveness. This is plainly revealed throughout the entire Word of God.

(This is part of a larger overview of some of the major Calvinistic teachings being presented today. For a more in depth look at Calvinism and its unbiblical teachings, go to: “Calvinism inin Light of God’s Word: A Variety of Resources”)