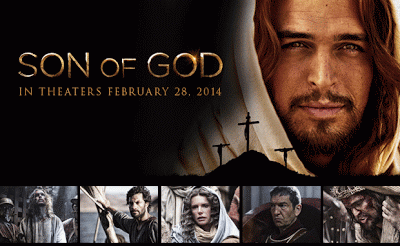 Unfortunately two of its most popular producers, Roma Downey and Mark Burnett are practicing new age /Catholic mystics. May those planning on seeing this movie prayerfully consider researching it more before going.

More food for thought from The Berean Call,

“Astonishingly, the evangelical church is progressively sliding into idolatry as it turns from the Word of God to visual imagery. A goal of the American Bible Society is to put the entire Bible on video to accommodate our visually oriented generation (which has little interest in reading). The Jesus Film, a dramatic representation of the Gospel of Luke, has been the staple of Campus Crusade’s overseas evangelical efforts. The very Catholic movie The Passion of the Christ became a runaway box-office hit, largely due to the overwhelming support it received from evangelicals. Biblically conservative mission organizations such as Gospel for Asia are using Mel Gibson’s Hollywood production as part of its outreach program. Millions of The Passion of the Christ DVDs were purchased by evangelical churches for their Sunday schools, Bible studies, and small group meetings.

“Religious movies are on the rise (e.g., The Nativity Story, One Night with the King) as evangelicals “partner” with Hollywood and demonstrate that they are an eager and profitable market. One pastor, whose church bought out theaters for private showings of The Passion (which produced only “one conversion”) repented. He came under the conviction that rather than partnering with, his church was, in fact, “pimping for Hollywood.” As true as that may be, and as praiseworthy as his repentance was, if he doesn’t understand the serious nature (as explained above) of attempting to represent God’s Word in dramatic visual form, he is vulnerable to repeating the same error with visual idolatry.

“This is not a blanket condemnation of the film/video medium, but films cannot be used to present the Scriptures visually without becoming idolatrous. Not only are the images historically false (they are conjured up from the imagination of a screenwriter or director) but they must also conform to the mechanics of the medium (acting, cinematography, art direction, lighting, music, sound effects, etc.), which are designed to manipulate the senses and the emotions for dramatic purposes (see Showtime for the Sheep?,www.thebereancall.org a more detailed explanation).

“Biblical movies are just one trend among dozens that are contributing to weaning evangelicals off the Word of God and producing biblically illiterate Christians. This is especially true regarding our visually oriented youth. In the final part of this series, we want to give more extensive examples of movements within evangelical Christianity that are aggressively turning our next generation away from the Scriptures and toward an idolatry of experientialism.

“We serve a merciful God who can rescue a soul out of the darkest of circumstances but who will not support by His grace man’s religious ways and means in their attempts to serve Him. “For my thoughts are not your thoughts, neither are your ways my ways, saith the LORD” (Isaiah:55:8). To the degree that we deviate from His way, we are lapsing into idolatry. As Jesus explained, “God is a Spirit and they that worship Him must worship Him in spirit and in truth” (John:4:24).”

Follow Up Article: The “Son of God” Movie is NOT What We Think by Blogger- The Last Hiker