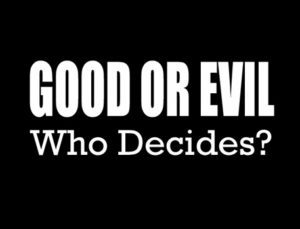 “Woe unto them that draw iniquity with cords of vanity, and sin as it were with a cart rope:

That say, Let him make speed, and hasten his work, that we may see it: and let the counsel of the Holy One of Israel draw nigh and come, that we may know it!

Woe unto them that call evil good, and good evil; that put darkness for light, and light for darkness; that put bitter for sweet, and sweet for bitter!

We live in a day no different than others where man refuses to submit before the counsel of God and hear His Holy Word.  We see from ages to ages, God pleading with man to repent from their ways and turn to His narrow path.  No different or special are we today to think we have achieved a generation that is pure or closer to Him, especially as we evaluate the love of self, ever increasing and developing into a propaganda instead of recognized as an actual sin.  This author does not wish to address nor comment on the ever decrease in the church but hopefully bring to attention just one of many things out today drawing our children’s ears away from the Word of God.

Yes, the church has many issues but let’s set aside that for another time and just look at what the world promotes for a second and make sure we truly are set apart from the true rebellion.  God alones calls us as His bride to “be ye Holy, for I am Holy” 1 Peter 1:16, and yet we stray often to easily to the grass and stubble, off the beaten path designed for us (Ephesians 2:10).

It’s not my intention to be a downer but simply use our God given discernment commanded from the Scriptures and identify things that could easily grab our attention.  It’s encouraging when a brother/sister reminds me that there is an enemy out there seeking to devour everyone of us (1 Peter 5:8), not with teeth, horns, or a pitch fork, but actively with false truths that grab our flesh and lead us away from the resurrected Savior.  Yes, we all have our weaknesses and I pray that we can use this opportunity as one to edify and sharpen for His glory, making us draw near to Him, when we recognize them and run for the safe and secure Rock!

My introduction is long over done and I do apologize but it’s from sincerity that you hear my love to point out this error not because I wish to enforce a legality to follow Jesus but that we would flee from evil and teach our children as well to do so.  I am no different and recently realized that my nieces and nephew watch a very popular movie being broadcasted to millions on the hit Disney Channel.  The title that I speak of is called “Descendants” and I’ll allow them to describe it for themselves:

“King Beast and Queen Belle marry and unite all the kingdoms into the United States of Auradon, where they are elected the leaders of the new idyllic kingdom. All of the villains, sidekicks, and accomplices are forced after their defeat to live imprisoned on the Isle of the Lost, a forbidden island surrounded by a magical barrier that inhibits magic and escape.

In present-day Auradon, Prince Ben, the teenage son of King Beast and Queen Belle, is about to ascend the throne. His first official proclamation offers a chance for four selected trouble-making teenage children of villains from the Isle of the Lost to live among them in Auradon and attend Auradon Prep. He chose: Carlos, son of Cruella De Vil; Jay, son of Jafar; Evie, daughter of The Evil Queen; and Mal, daughter of Maleficent.” (http://disney.wikia.com/wiki/Descendants)

Now it’s nothing new to learn that Disney is forever pushing the agenda to call evil good and good evil, but just because something becomes the norm does not excuse us as believers to shed light on darkness and reveal it for what it is, a lie from Satan.

Now, we could explore and dive into the foundations of Disney and what they forever want us to be drawn to but that would be an exhaustive article that neither this writer nor the reader probably wants to dive into on this occasion.  But let’s all be honest here and just start with the foundation that they, Disney, are far from Biblical or encouragers of Godly ideas.  This however, this movie that points out key villains, and makes them out to be “not so bad” is pushing the envelope and capturing our kids’ minds further away from the truth of God and His Word.

Let’s just look at one character specifically because my niece pointed her out and wanted to be like her.  I had no idea about this movie nor did I see it coming which is why I had an urgency to share this with you all so that you could be aware and set your home apart from these philosophies. Here’s a look at Mal, the daughter of the commonly known Maleficent from the famous movie Sleeping Beauty. 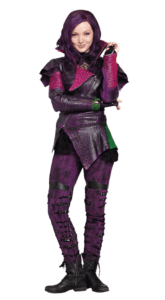 “Mal, which is short for Maleficent, named after her mother, is the very example I wish to shed light on in which Disney paints over every idea God hates (lies, envy, vengeance, spells, etc) and makes them look as if they are simply victim characteristics that we all enjoy and make do with.  You ask, how could they truly masquerade themselves as you say and it be so deceptive?  Well, you tell me and let Disney justify for themselves:

“Mal is a sneaky, smart, and (sometimes) ruthless girl who is a natural leader. Though she is compassionate to a degree she is also vengeful and doesn’t forgive others easily. She is artistic and has a knack for casting spells, but only if needed. As the daughter of Maleficent, she wants to be like her mother: pure evil.” (http://disney.wikia.com/wiki/Mal)

Sneaky sometimes? Compassionate to a degree? Doesn’t forgive? Knack for casting spells…only if needed?  The very core of them building a defense is justification.  That is the society in which we live.  I remember watching “Free Willy” when I was a kid and loved at the end when they stole the truck to tow the whale and then broke in and stole Willy, taking him to the ocean.  A true American written movie to inspire our emotions and draw us to conclude breaking the law is ok.  I never thought about this until recently watching it again and observing that yes, even in a bad situation, we must adore what is good, and stand before a Holy God for every action we make.  There are ways Scripture leads us to do things and yet the father of all lies, Satan himself, desires us to ignore them, and justify our way with right from wrong.

Too often our enemy would like us to believe there are gray areas, or gray lines if you will, that divide right from wrong and we can get as close as we’d like as long as we’re not “convicted”.  Again, a direct lie from Satan and couldn’t be further from the truth.  God draws His line in the sand when He wrote about what to do with evil:

“Abstain from all appearance of evil.

And the very God of peace sanctify you wholly; and I pray God your whole spirit and soul and body be preserved blameless unto the coming of our Lord Jesus Christ. 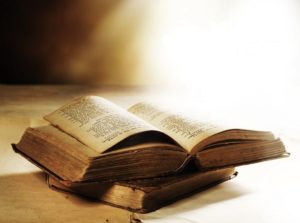 We are to abhor anything that God defines as evil and that goes for any sort of power in which steals glory from Him (Deuteronomy 18:9-12). Satan doesn’t care if we perform good works or save the world from hunger.  He doesn’t care if we become one religion and solve world peace.  He certainly doesn’t care if we mess up sometimes but do more good than harm.  ALL HE CARES IS THAT GOD DOESN’T GET THE GLORY!  His lie from the beginning is that we can become like God (Genesis 3:5), and that through, “me, myself, and I” we can achieve happiness and peace.  But oh Church, don’t we know, haven’t we read this time and time again through His Word?  We should see this coming time and time again and yet we let it creep it’s way in.  May it not be so.

I can tell you from this learning experience, I will take a stand on asking what my younger family is watching, encouraging them to stand guard, and listen to what the world is teaching.  Then always measure it according to what God says.  He loves us so much and desires that we be set apart, is it too much to ask that we question what we take in and those around us?  Take this as a reminder and share it with others.  We will serve our Heavenly Father today, tomorrow and until He returns!  Let’s take this as an encouragement in truth, and not as someone pointing out these fun and interesting shows as wrong to be legalistic, but as a pure motive from God’s command to lead the sheep, as we all, ALL, are weak and fall astray to easily.

Jeremiah 50:6 – “My people hath been lost sheep: their shepherds have caused them to go astray, they have turned them away on the mountains: they have gone from mountain to hill, they have forgotten their restingplace.”

Psalm 119:176 – “I have gone astray like a lost sheep; seek thy servant; for I do not forget thy commandments.”

Isaiah 53:6 – “All we like sheep have gone astray; we have turned every one to his own way; and the LORD hath laid on him the iniquity of us all.

Posted in Uncategorized and tagged biblical christianity, Discernment, Entertainment, family, Lies, Movies, Psychology, Self Esteem, Sin, Truth, Youth
← The Only WayAbove It All →